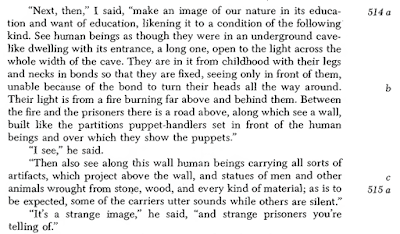 I was in deep trouble as a political philosophy undergrad when Book VII of The Republic hit me, and that was all she wrote. The allegory of the cave happens in Book VII. That's Socrates's treatment of the eternal human condition. It's a sad story. Only the elite whose souls somehow emerge into the light of reality see things as they are. The rest of us are kept below in the theatre, our necks chained, a fire burning behind, our vision trained ahead to a wall on which dances shadow puppets we mistake for real objects.

Some in our Thursday night Plato seminar used the allegory to free themselves and climb into careers as political science professors. Me, I loved the sentences.

They are in it from childhood with their legs and necks in bonds so that they are fixed, seeing only in front of them, unable because of the bond to turn their heads all the way around. Their light is from a fire burning far above and behind them. Between the fire and the prisoners there is a road above, along which we see a wall, built like the partitions puppet-handlers set in front of the human beings and over which they show the puppets.

I especially thought that last sentence and the way it layered itself back and up and away like a switchback road was pretty clever. It took my thoughts not to the empyrean above but to the ramshackle Twin Drive-In on 137 Ave where, as kids, we were loaded into the car for John Wayne movies, our pyjamas under our clothes. And then, when I was a bit older, to the Londonderry Mall cinema where with friends we went to the movies without our parents. It didn't matter what the movie was. Paying for a show with coins in my own pocket and then walking down the ramp to our seats in the artificial twilight of the cavern was freedom.


How could Socrates banish from his ideal city writers with this poetic touch?