Alex sent the text from Toronto during the Jays-Phillies game earlier this week. Centrefielder Kevin Pillar had just homered on the way to an 11-3 win.

The text message, I mean. Not Zach Eflin's fastball up and not quite inside enough that Pillar sent to the left field seats.

Here's how I scored it.

First, it's baseball. We talk baseball. Fathers and sons have long done this. We're no different. It gives us something to talk about. It's a lovely game. The players round the bases counterclockwise, like the planets. My father can throw a baseball. I remember a deep red glove he kept oiled.

Second, it's the Jays. The boys and their mother and I are fans. A few years back we sat across from Bautista with the Rays in town. Last year, we went to Seattle. We still talk about the Jays-Rangers series and the bat flip. When we're together, and a TV is nearby, we'll watch the Jays on Sportsnet. Alex loves his country. The red maple leaf on the team's logo reminds me of the lapel pin maple leaf my grandfather, an immigrant in Canada, liked to wear. He was in Toronto once, on his way by train from Halifax to Edmonton and a new life in a new country on the prairie. His name was Alex, too.

Third, the text is nicely written. No words wasted. There is a where, a when, a who, a what just happened, a how to the 2-0 score. Behind it, I read the why of wanting us to be together to experience the important stuff, even though Alex was in Toronto, and I was in a meeting at work in Edmonton. Or especially because we are apart.

And a pic of the empty bases after Donaldson hit a grand slam. 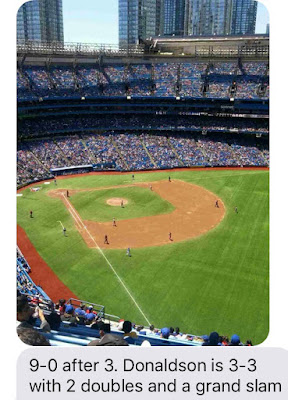