February 09, 2016
The silent snowflakes spun to the earth like paratroopers.

Pekka Tahkola was the first to notice the invasion. He jumped from his chair in the hotel room we were in, some fifty or so of us in one room, and he ran to the window and the world beyond. Decades of his life seemed to melt away, so that by the time he reached the window he was again a boy, or, what's more accurate, he was again the boy we chase on the other side of the man.

We clapped and cheered. Not for long, but for long enough to make a mark. I had never before in my life clapped for snow. I have admired its beauty. I have photographed it. I have marvelled at it. But cheering for it? Never. Now, there I was sitting in Minneapolis at the World Winter Bike Congress breakout session on Finland's preeminent position in the pantheon of winter cycling and I was cheering as the snowflakes twisted and turned down down down. Down.


And, yes, it all fit. A winter cycling convention needs snow.

And there was some nostalgia in the glee in that room as we remembered walks on windrows to school and other preserved scenes of youth.

But there was also a flash of dread. Is winter going south on us? Are the winters shorter, more mild, less snowy, less sure of themselves than ever before? And after years of complaining about living in winter cities, moaning about the cold and the dark and the ice and the snow, have we begun to sense that winter is leaving us, not just for the season, but leaving us high and dry? And that we actually do love the season?

These glimpses at the cold truth came back to me this afternoon in the locker room at the gym as two business types traded observations about the weather.

"Another few days like this and there won't be any snow," said the first business type.

"Yeah," said the other business type. And then after a few seconds of allowing it to sink it, this: "And it's kinda sad."

It was +9 degrees C outside today, Shrove Tuesday.

There is a novelty to the brownness outside, but I sense that that novelty is wearing off, and we'd just like our winter, our snowy winter, our winter that's white and not exhaust black, back.

People ask me what I learned in Minneapolis at the World Bike Congress. I learned a lot about bicycling and infrastructure and bicycle culture, and I learned that there are engineers who can speak engagingly for hours about intersections, and signals, and road salt.

I also learned that we should take the time to watch the curtain of snow fall on the days it falls, numbered flake by numbered flake, upon us
" 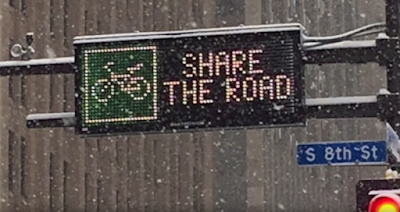