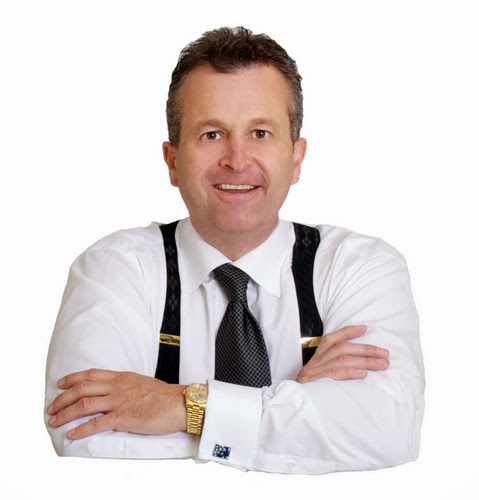 When it comes to images of house-seller Terry Paranych, I still prefer the bus bench variety. His arms are folded confidently. He is looking ahead confidently. He appears trim and powerful and healthy and forever about 38 years old. In the suspenders, there's both a touch of the guy who has taken off
his jacket to get to work for you, and a whiff of the guy who's not afraid to show you he's doing quite well by taking off his jacket and getting to work for you.

Plus, he gives the bus set a place to sit while waiting for the #1 to trundle down 102 Ave. Good guy. Nice teeth.

So, how to square that picture with the flame-throwing Paranych who emerged on Twitter recently? In a series of tweets, Paranych tried to torch the reputation of Ward 1 councillor Andrew Knack. He called Knack a "liar" and "The Great Pretender." Knack, said Paranych, made an "idiotic" decision that "let down" his constituents. He ridiculed those who support Knack as capital G "Groupies." And, while he was rolling, Paranych also predicted Knack's ouster:

Yes, this is a fight about snow. Actually, not much of a joined fight, because, as far as I can tell from this distance, the so-called lying, pretending, idiotic Knack wasn't so idiotic as to hurl back any incendiary words.

What Knack did do, though, was help compose a majority on city council by passing a motion to try
something new with snow removal in Edmonton this winter. In select neighborhoods, Paranych's Crestwood being one, automobile parking will be limited to one side of the street. Snow will be piled on the other. This will allow, the argument goes, city grading crews to do a better job derutting the roads, getting closer to the pavement, making the passable possible.

Council veterans might be silently chuckling over the acquiescence of Knack, a city council rookie, in offering up that chunk of his Ward 1 for the experiment. Personally, I thought it was leadership from Knack that kinda fit the personality of Crestwood. For 20 years or so, I have lived in Parkview, which borders Crestwood, and have long thought Crestwood to be a pretty cool community. They have a great rink, funky light standards, a beautiful roundabout with a Christmas tree. They do things like get together to fight shortcutting cars down 95 Ave. They have inspirational messages on the community league sign. In my experience, they are a progressive, welcoming bunch.

And, so, when I first heard that Crestwood was one of the snow pile pilot zones, I thought, there they go again, leading the way, trying something new. Stars Hollow.

He also purports to speak for Crestwood and says, basically, the snowpile idea is bonkers. For his reasons above and for others that have emerged in media coverage since. His elderly parents visit and they, like other good seniors in the neighbourhood, need room to safely park and move. His son (who's a pretty decent young hockey player) might walk on the windrows and fall and be hit by a car, an imaginary doom and disaster the blame for which Paranych has already consigned to, yes, Knack. And besides all of these safety reasons, why, asks Paranych, did Knack ever offer up Crestwood?

No doubt, Paranych speaks for others. And by some of those Twitter fans he is being lionized as future mayor material. That roar has only grown louder by Paranych's own Twitter apology, which is another in the genre of I'm-sorry-if-you-were-offended mea culpas.

"If I offended anyone with my Tweets I apologize, This is a Huge Issue for us in Crestwood and we feel Councillor Knack let us down #yegcc," he wrote.

(Note to rhetoricians everywhere: if you have two thoughts of unequal value to share, syntax can help. Start with the flimsy and finish with the heavy. Just like Paranych did in that apology, which, is just as much an apology as it is, by the end, an attack reboot.)

I have enjoyed watching all of this play out. This just doesn't happen every day. It provides a

lot to think about. Paranych is all Nietzsche light. As he reminded us in a recent retweet, "the difference between a successful person and others is not a lack of strength, not a lack of knowledge, but rather a lack of will." For his part, Knack presents himself more as a servant. Or as someone who believes that city administration can be trusted with his reputation.

The still-keen Edmonton Journal reporter David Staples has told us the two men have met, shaken hands, and agreed to disagree. I offer only that, perhaps, this is a quiet victory of reason over will. Paranych has reprised his if-then apology, telling The Journal, "If I've said some things that I shouldn't, I do apologize," continuing, because unable to stop at that point, by bringing it back to himself with a "but I'm a guy that talks from the heart." As if the heart was a simple thing unacquainted with deceit and guile.

Okay, back to snow to bring it home.

Because Paranych does deserve unalloyed credit for one aspect of this entire verbal shelling incident. And that's that he has forced us, like a good real estate man, to consider the value of land, to see anew the utility of the patch of pavement that is the city street in front of our properties. What should take up that space? Snow? Parked cars? Nothing? Does it matter? If the city street does not, technically, belong to the homeowner whose land runs to the city sidewalk in front of it, what sway should that homeowner have on how the public space is employed? If there are different perspectives, whose wins? Is the contest decided by will?

To this muck, I add the silent perspective of me, the bicycle commuter. Because when you pedal down city streets, you no longer see as unproblematic the parked cars that line the sidewalks. When driving a car, leaving that car, parking it for free on the city street in front of your house is the most natural punctuation mark to the drive home. But, for a cyclist, it's also a question mark, as you realize how these stationary hulks actively funnel you closer to the danger that is a moving vehicle. Parked cars, snow windrows, kinda the same, in a way. Not the majority point of view, for sure, but an additional point of view that does emerge to my mind in the rich aftermath of the Paranych attack.


And, so, for taking me down this road and other roads of thought, I do thank Terry Paranych.