And Snow It Begins

Actually, "it" is the oldest, easiest story out there. Old because it is as old as the hills it covers. Easy because it actually falls into the laps of those, like TV news personalities, whose job it is to tell us important things and reflect us back to us.

It snowed today in Edmonton, Yes, it did. The city looks like a piece of blank foolscap ready for inscribing. And the snow means that the storyline of the last few weeks—that is, how much longer can we get away with no snow?—has given way to the new questions from TV land. These include: will the white stuff actually stick around? How much more will we get? And, should I get winter tires this year?

The winter-tires question is the penetrating one, because it gets us a bit closer to one reason we are told we so dislike the arrival of the season. It turns out to be pretty simple: it's hard to drive automobiles when it's snowy and icy.

In fact, that was the sole theme of one story on the supper-hour news tonight. Viewers saw blowing snow, a dented truck, a fire truck, a close-up of a damaged wheel, some fluorescent road pylons, and heard from a police official suggesting that drivers give themselves extra time to arrive at their destinations, and then saw shoppers scooping up snow tires, snow brushes and wiper blades. Save for a mention of snow shovel sales, the entire 1:20, 29-shot story concerned the predicament of winter weather driving.

This is not meant to convince anyone it is easy to drive in the winter. It isn't. It can be nerve-wracking, it can be cold, and it can be slow. This tweet from today makes the case even better in even-better Edmonton voice: 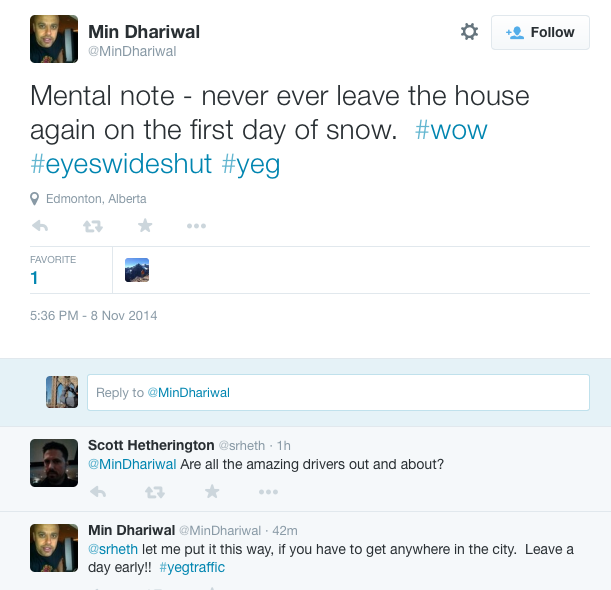 It is all to suggest only that there is a distinction to be made, a line to be drawn in the snow, a point to remember as the stories about winter pile up and, eventually, blind us to what's pretty nice about the snow, such as going for a walk in it.

* "And so it begins" is a direct quote from a TV news personality tonight. I single it out only to think about its construction. Present-tense verb at the end gives a feeling of saga, epic. The rhythm rises with and so and then drops and picks up speed with it begins. There is an attempt at the authority of the knowing narrator. Begins is more ponderous than starts. We are on the way down, we are into the ordeal, we are told in not so many words.