Pumped Up, Ready To Show!

I love the fact that this video is set in that most ambiguous of locations: the gas station. Because it's there that we are alternatively reminded of the freedom that waits down the road, and the price of that four-wheeled, fuel-injected liberty. There we contemplate, even as the dollars-and-cents numbers contort their way up in an abracadabra-like cardinal value march, how, simultaneously, we are drawing down both our disposable income and our stores of the non-renewable resource in that very same act of  filling up.  And, so, to witness joy and song and love in a setting that is the natural backdrop for none of those renewable resources is incongruity at its surprising best.

I love how rock star Will transforms the nozzle and hose into a mic and cord. Or into a telephone.

I love how seamlessly they move from being each other's lead to backup singers.

I love how the creepy surveillance aspect of it all is undone by a story song. And no less a boy-girl song than one programmed to hit the cheesy-couplet truth that, in the end, it doesn't make a difference if we make it or not/We've got each other and that's a lot. 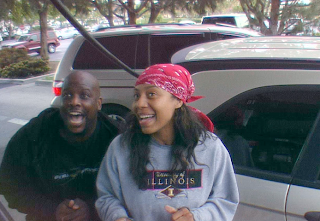 And I love how that couple hit their solos. I mean, how much of life is a silent, grinding complaint that if we just got the chance, then we could show everyone what we've got? How much of life is a careful, methodical planning for what could go wrong and a calculus of how we would respond in each contingency? How little time do we spend contemplating what we would actually do if fortune smiled on us, and the unlikely sources those smiles could shine from? You gotta admit, editing aside, Will and Monifa nailed it and they nailed it when they had to. And that will always be two different things.

Pumpcast News is a feature on Jay Leno's Tonight Show. The producers have insisted the Sims's performance was not planted, even though the couple are no strangers to the stage in Chicago, where they used to live. I love to believe they are telling the truth.