It Wasn't A News Story

May 22, 2013
My bicycle handlebar video will never make the wild and extreme Go Pro video of the week. It's not shot down the side of a volcano or beside a coral reef. And it will never rise to the level of the Russian Dashboard Masters whose fixed cameras cams routinely capture meteors and crashing planes. The scenes I am interested in recording are more mundane. The sun in the east as I roll up to 124 Street, for one. 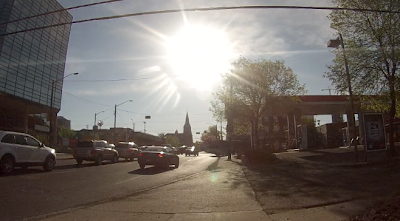 But the more I record my rides the more I have developed an almost actuarial sense of the dangers out there. Or the dangers in there. Like the scene that presented itself in slo-motion this morning as a young girl intent on getting to her school bus on time got to her school bus on time. She is alive tonight because the car driver hit the brakes. What didn't become a news story starts at about the seven-second mark as she runs out from the left part of the frame.


That was too close. And then the morning went on.
cycling edmonton glenn kubish traffic safety