Because this year, I tried something different. I had to. All but one of my 48 winters have been spent in Edmonton, and that means I know in my bones what that season can deliver. Endless blue skies and jewelled nights, sure, but also cold and snow and dark and wind. And wind and dark and snow and cold. The moaning around the frozen water cooler. Winter in Edmonton can dent the spirit.

When the world was the street where I lived, it was different. I just accepted that for a few months, I wouldn't be able to see the
pavement of that street—and, so, we played street hockey on the ice and snow. But then I grew up and put away the childish things and realized that the pools of Las Vegas are really only three hours away. As the imaginary world grows more vivid (and, in some ways, more reachable thanks to seat sales, marketing and Westjet), the real world of snow on 148 St can make you more unhappy.

And that's what was beginning to happen. Don't let the darkness in your head, Blue Rodeo counsels.

So, under whatever wicked cold spell it was, I decided to take it on, and taking it on meant riding my bike through it. Most days every week I packed my clothes in my old panniers and rode downtown to work. There were some cold rides through windchilled -30 degree temperatures. There were a couple of wipeouts. And, until I got the rhythm of it again, some tense moments spinning alongside the moving metal canyon walls of buses and vehicles on 102 Ave.

But life is risk and risk can mean gain. And, besides a few strained nerves and for a few days of a sore left shoulder, I saw some old things new.

The truth is the cold gets in when we are dressed for where we are going, not through what we are going. So, if work has you in dress shoes and a suit, the temptation will be to run out and scrape off the car windshield in those clothes, modified only slightly (maybe a pair of gloves) for the temperature at the start of the morning commute. Cycling to work prohibits that kind of sartorial shortcutting. Having no choice, I dressed properly from tocque to toes. Result: this was my warmest winter of my working life. Thank you, Skiers Sportshop and Red Bike.

The cold truth is winter is beautiful. Through the eye of a real artist like Erin Pankratz-Smith, this truth is unavoidable. The giant mosaic Everything Flows, Nothing Stands Still hangs in the U.S. Departures hallway at the Edmonton International Airport, and, while it celebrates the movement of the seasons, the observer-participant is forced to confront the artist's love of winter, both macro... 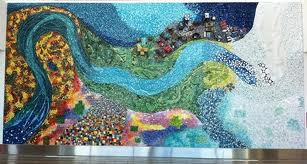 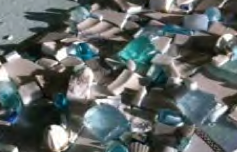 It is a thrill to move along the MacKinnon Ravine bridge and take in the sight of the neon-dotted skyline hulks emitting their thought balloons of exhaust out there far to the right and then register the crunch of snow under tire below and then, turning onto Ravine Drive, lose the skyline behind a veil of snow-snagging spruces. Turner sky. Exhale.


The cold truth is it doesn't last. It's not a fist. Winter is delicate, always changing in tones of white and silver and platinum. It ain't Vegas.

And the cold truth is it's strange how sitting warm and safe inside a powerful vehicle while the radio plays isn't as much fun as having my helmeted head open to the sky while I hum and muscle the pedals and try to keep the pace of my thoughts.

There is a movement afoot in the city called Make Something Edmonton. It is the birth cry of a generation that is tired of hearing that Edmonton is too cold, too north, too dead, too not Calgary or not Vancouver or not Toronto. The challenge is to quit yelling and start telling. Start making things. Start telling our stories.

For me, that has meant making peace with winter. The cold truth is I think it can be done.