March 02, 2013
Tonight's LA Kings Twitter post won't get as much attention as the infamous spear from last year's NHL playoffs.

Remember? It was immediately after the Kings beat the Canucks 4-2 in Game 1 of the Western Conference quarterfinal that we saw and laughed and reacted to this gem:

The Internet lit up, the mocking tweet became news, the @LAKings apologized, sort of, B.C. wondered if the rest of the country was, indeed, cheering for them to lose, they lost, and the Kings went on to win the Stanley Cup.

The Kings are playing the Canucks again tonight and most of the tweets from the LA Twitter account are pretty typical shots at the manhood of the Sedins and Lapierre. But there was also this one:


LA Kings ‏@LAKings
Great pass from Burrows and Hamhuis one times it past Quick. Canucks up 1-0 early in the 1st.


That's not a tweet you'd see from too many other NHL teams. Really, would the Oilers compliment an Iginla-Cammalleri pass that ended with puck behind Dubnyk? It's much more likely that a virtuous Flames goal would trigger some form of a cheerleading tweet in response. That's very understandable. Rivals, whether they are sports teams or politicians or corporations, don't deal much in praise of the opponent.

Now, you could chalk up the @LAKings' magnanimity to a sense of superiority. As reigning league champions, the team has some latitude in which to protect and praise the game itself, and not just the game tonight.

Or maybe the account got hacked. Or there's an inside story and someone on the Twitter team lost a bet to a colleague in Vancouver. Or someone is drinking.

But maybe it's a quick verdict about Twitter itself, and how predictable it sounds, especially as organizations try to find authentic voices. Because that @LAKings tweet cut through all the cheerleading and let us see it for what much of it is: script. Maybe one reason nobody believes much of what anyone says anymore is we sense it's all subjective. The @LAKings tweet reminded hockey fans of whatever tripe that we're united by the colourless beauty of the game.

Or maybe I'm just making it all up. After all, the Kings lost tonight, but they're not exactly living in the present:

But, come to think of it,  it was a pretty sweet goal by Stoll. 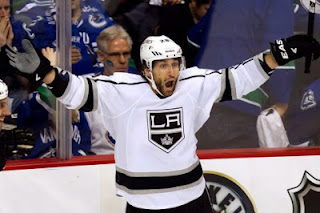