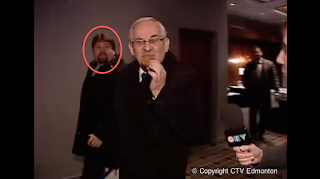 For as long as I have been studying the complex mediascape that Stephen Duckett walked into through the lenses of a couple of conventional news cameras, I have been kinda intrigued by the muscle in the background. That guy with the goatee and the feathered hair and the bag. That guy who walks beside Duckett and, at turns, tries to convince reporters there's no time for an interview, moves ahead of a reporter on the staircase, attempts to guide one (a reporter, that is) into a tree, and then who opens the door for the then-Alberta Health Services President and CEO, the door, which, when closed, sealed his walking companion's political fate. I just wonder, is he a communications colleague, a security guard, a medical official? What was he thinking? What is his perspective on the event?

I thought about him again on this Reading Week night with Gurney's 2011 dissertation, Infectious Culture: Virality, Comedy, and Transmediality in the Digital Age on the table in front of me. Gurney likens the infective and replicative power of the biological virus to the cultural virus that spreads with seeming chaos through networked computers. Here's a sample of his elegant metaphormosis:

"Once infected with a virus, for example, a host organism can typically transmit its infection to multiple others hosts, rendering the relationship between the virus and the host one not just of parasitic dependency but also unwitting complicity."

At a preliminary level, the cookie acts as the virus, literally entering the body of the unwitting host, in the process entering the body politic with its cultural codes and memories of the Muppets, mutating, then, into the Cookie Monster mashups from the remix artists who digitally summon and manipulate those childhood images.

Gurney argues that for the virus, timing is crucial. It must "enter its host and infect it before the host's immune system can cut off or limit the cycles of replication," he says.

And that's the line that fired the memory of the image of Duckett's companion, and his role or attempted role as an immune system.

Who knew things were so complicated these days? 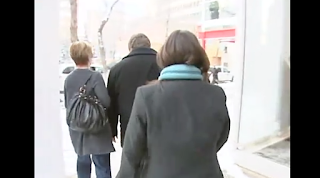