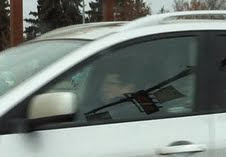 For whatever reason, an act that I have thoughtlessly performed tens of thousands of times in my life struck me in a new, startling way earlier today. That act is the simple one of putting on a seatbelt before firing the ignition of the car.

Until now, that click meant I agreed with all the safety advocates who have for years argued that my chances of surviving a crash were much better if I was belted in.

For whatever reason, though, this time what struck me with that click was that I had, albeit in a symbolic way, become one with the vehicle. Literally, I was tied to it.

Over the years of driving, I have had fleeting thoughts about the deeper meaning of automobilia. There really is a lot to think about. Stopped at a red light, I have had intimations of my mortality. I have wondered about the personality that we graft onto vehicles due to the look of the grilles. Traffic circles or traffic lights, what are the assumptions about human nature behind each? Why do we assume we can't be seen inside our vehicles? In what sense do we communicate through our vehicles? Springsteen's Wreck on the Highway. The Beach Boys' Fun, Fun, Fun. Memories of going on Sunday drives in my grandfather's '65 Ford Custom. The '72 Challenger. What happens to us when we a thought in our brain translates into the roar of acceleration below? My advice to the boys as they learned to drive: "It's not personal. Don't make it personal. Try never to make eye contact with other drivers if you are angry. Just outthink them." That moment out of time when your eyes meet another driver's, both cars stopped in traffic, and you just see each through the windshields, sitting there inside all the metal and glass."

I learned cybernetics long before I was taught about cybernetics, and it was driving, and defensive driving, that taught me. The word is from the Greek kubernetes, meaning steersman. Its proponent, Norbert Wiener, defined it as the study of messages as a means of controlling machinery and society. Cybernetic schemes are self-regulating through feedback. I get lost when I try to read Wiener instead of those who try to explain Wiener, so I will leave it at that.

In Steve Mann's Cyborg, the author points out that  "the work of Norbert Wiener allowed for a new understanding of information processing and put forth the intriguing idea that the human being would, in the future, exist in tandem with the computer as a single cybernetic system."