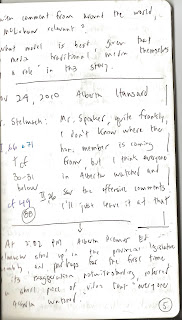 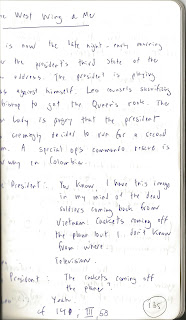 Back on 11.27.10 I started taking the time to put down my thoughts and questions about my final MACT project. My first entry, titled "Duckett Thoughts," was a simple question: Is there something about the abrasiveness of D's response that doesn't fit the TV medium?


Between now and then, and in times of many thoughts and in times of few, I have kept at it, and, more importantly, not been afraid to come back to it after a few weeks (or months?) off. 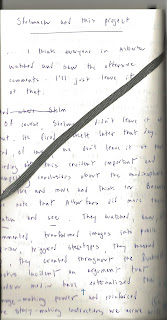 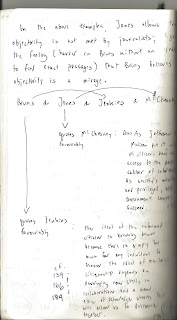 It has turned into a road map of my thinking journey, with the different authors and profs serving as the places I've stayed for awhile. For instance, it shows the route from Gow to Jenkins to Jenkins in person (in Vegas) to the Jenkins email to Duncombe to Lippmann to Patterson. (It's been a good time for amazon.com!)

The premier said, I think everyone in Alberta watched and saw the offensive comments. I'll just leave it at that. But he didn't leave it and that, and no one else did either. On YouTube, people watched, saw, shared, commented, replayed, edited, transformed images into public opinion and public opinion into images, mashed up, triggered stereotypes. They created my argument, which is that new media have externalized the human image-making

power and reinforced the storytelling instructions we all arrive with.

That is one of my latest entries in the journal, which now comprises almost three, full Moleskine notebooks. It has gotten to the point where it's fun to listen to the authorities talk to each other across the pages. I have a very analog footnote system that connects one day's thoughts to another's. It's the only way to prevent even more forgetting.

Somewhere, in all of this, is my final project!

Once summer rolls around, I will have to try to find a way to input the pages into an online form as a way to try to draw it all together for the assault on that final project. But that won't be quite as much fun as carrying around my notebooks and using pen on paper wherever I am to put that next thought down.

And he makes his point with the pencil. "In fact, such thinking is what allows technology to steal away the human aspects of our daily lives, including the simple (practical) pleasure of the tactile feel of pencil on paper." (p. 20)