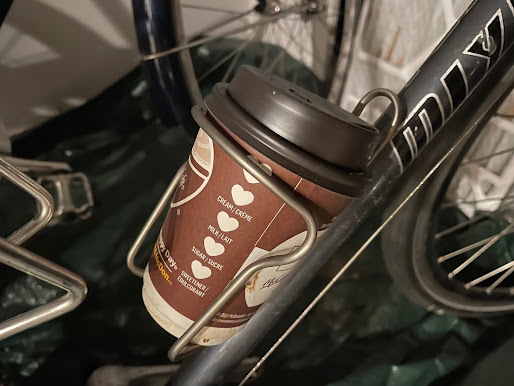 From Edmonton, Canada, happy end of the week, friends.

Here are three things that I noticed made me happy or grateful this week.

This week's podcast and transcript.

1. Human beans  ☕
I was out for a morning bike ride and was coming up to a construction crew putting in new sidewalks on Saskatchewan Drive near the Humanities Building. Infrastructure scenes are rich. Hard hats, big boots, worn jeans, rumbling cement trucks, laughter, cigarettes held ash tip and ember pointed in—and the greatest care with rakes and trowels to set the sidewalks as perfect as paragraphs. Anyways, three workers were just ahead of me, kneeling down, stirring their coffees.
“Looks like I arrived at the right time for coffee,” I said as I passed, as a joke, a throwaway question.
Without a second of delay, buddy says back to me, “Brother, how do you take yours? Cream? Sugar? Just black?”
“Half a cup,” I said, “just black, you are very kind.”
“Absolutely,” he said, “it will get you through the rest of your ride.” 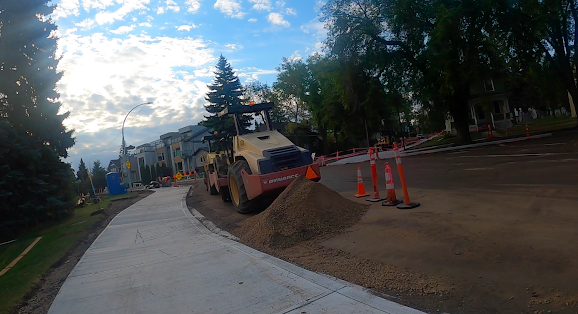 He poured out half a cup from the McDonald’s carton. I took it and said thank you. They got back to whatever story I had interrupted and I pedalled off toward 109 Street. I stopped at a bench near the High Level Bridge to sit and chill. I realized I did not offer to pay for the coffee. It didn’t occur to me to put money into the equation. Because, I think, I knew it wasn’t a transaction. For a moment, I was a player in a different kind of economy. The gift economy. And it felt very natural and quite good enough to be grateful. I saw clearly for an instant how much I need, maybe we all need, to be a “you” and not an “I,” to be a stranger every now and then who gets a bit of help for the rest of the ride. Made me resolve to watch out for other strangers—known or unknown. 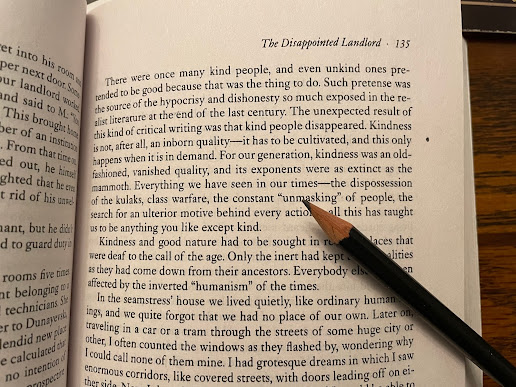 2. A life sentence 📙
Hope Against Hope is the memoir of the Russian writer Nadezhda (whose name means hope)  Mandelstam, also known to history as the wife of the poet Osip Mandelstam. It is an account of life in exile in Stalin’s Soviet Union, an apology for the life of literature, a study of atomized society. I have long been attracted to the Russian writers, and feel their pull again these days. They have seen and witnessed certain things about life, and have stood up to be counted. For the podcast, I asked my friend Brian to read a passage from Mandelstam that found me a day after the gift of the coffee. It’s about kindness. Brian is kinda Russian, Hazeldean Russian, in his outlook. It's from p. 135.
There were once many kind people, and even unkind ones pretended to be good because that was the thing to do. Such pretense was the source of the hypocrisy and dishonesty so much exposed in the realist literature at the end of the last century. The unexpected result of this kind of critical writing was that kind people disappeared. Kindness is not, after all, an inborn quality—it has to be cultivated, and this only happens when it is in demand. For our generation, kindness was an old-fashioned, vanished quality, and its exponents were as extinct as the mammoth.

Thank you, Brian and Madame Mandelstam, for your voices of kindness. 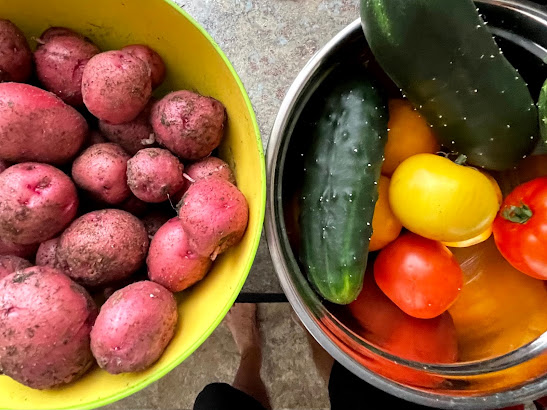 These days, I sometimes just sit at the dining room table and stare a bit longer than natural into the bowls of tomatoes and cucumbers and potatoes. It’s the time of year the vegetables are coming in from the backyard garden. I love this time of year. The air is crisper. The leaves are turning. The baseball matters. And the cukes and the spuds and the tomatoes are with us again. Auntie Shelagh is on their frequency.

“They’re gorgeous colours...they have dirt on them...I love them,” she said

Mine is a harvest of nostalgia, for sure. We had great gardens growing up. The garden was a kind of city, actually. Subdivisions of beets and beans and carrots. Fences of peas. Valleys of cucumbers. Towers of corn. But there’s more to the scrutiny of the bounty. As I contemplate the shapes and the colours of the vegetables in our house now, I see them as presents, especially the tomatoes, wrapped in red and yellow and orange holiday paper, with a kind of stalk of wild green ribbon on the top. Inside are the seeds that keep the gift cycle going. We put time and money into those veggies, for sure, they’re not free, but we also grew some of our own food this year, which is freeing—and freeing is what a gift feels like.

I hope you all have a good weekend, friends, and that you’ve planted some kindness to be cultivated in the fullness of time, or soon, whichever comes first.