Great moments in Canadian (and junior high) track and field 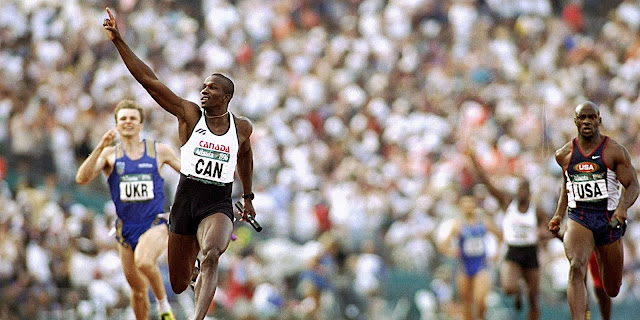 Bruny Surin knew before the rest of us did.

As soon as the Canadian sprinter transferred the baton and the heart of a nation safely into the left hand of teammate Donovan Bailey, Surin raised his arms in victory. Roughly nine seconds later, his celebration was confirmed. The Canadian men's 4x100 relay team had won the gold medal at the Olympic Games in Atlanta.

"Oh, if you're Canadian, you have to love Saturday nights in Georgia!" said CBC commentator Don Wittman as Bailey crossed the finish line.

Today is the 24th anniversary of that consummate team accomplishment. It was later punctuated by a bit of Canadiana trope, as Bailey said sorry to his teammates—Surin, Glenroy Gilbert and Robert Esmie—for easing up at the finish line. Not easing up would have meant a world record and not just the gold medal.

It was the second most amazing track victory I had ever seen. The most thrilling, of course, was Mario Nemec's win in the 1100 metre race at the zone track and field championships at the Southside Athletic Grounds in Edmonton. We were in Grade 8.

In Grade 2, he helped introduce me to injustice. Like all of us, Mario collected O-Pee-Chee hockey cards. Unlike any of us, except maybe Johnny Manna who had some family connection to a corner store, Mario had the Ken Dryden card. 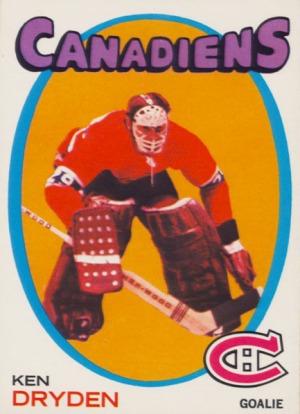 One day in class, a stack of cards, including the 1971-72 Dryden with the original mask, fell out of Mario's pockets and onto the floor of Miss Lafleur's classroom. She had warned Mario to keep his cards together. She stopped her lesson. We put down our round-edged scissors. We couldn't breathe.

The teacher scooped up the cards, including the Dryden with the mask card, and announced she was taking them to the incinerator room. Those were the days teachers could just walk into the incinerator room of a school. She came back and the rest of the afternoon unfolded as if she thought nothing in the universe had changed, when, of course, everything had turned upside down. The Dryden card and about 40 others were gone?

At the end of the school day, Mario and a gang of us ran past Mr. Antoski's Grade 5 classroom and toward the incinerator room. Those were the days seven year olds could run into the incinerator room of a school. We rounded the corner at full speed and opened the door. On the other side was a different world of pipes and tanks. It was hot. The light was dim. It smelled bad. Together we heaved open the steel hatch and felt the heat from burned innocence on our little faces as we looked at the heap of ashes. This was hell.

In Grade 7, Mario was the expert at filling his mouth with butane from a Bic lighter and blowing flames like Gene Simmons from KISS. He would do this in the hallways as we walked between classes at St. Francis of Assisi School. In giving, we receive, I suppose.

And in Grade 8, Mario was our school's only participant in the 800 metre race at the zone meet.


The 800 metre is a cruel race. To win, you have to be a great middle distance runner and a great sprinter at the same time. An unhealthy chunk of the 800 metre race is run full out, even in Grade 8. Mario was a great runner and a great 800 metre athlete. Nobody came close to him at the school qualifiers. His family was from Yugoslavia. All we knew about Yugoslavia in Grade 8 was it was somewhere else and people didn't want to live there.

All we knew that day in June as we sat in a yellow school bus on our way to the zone meet across the river and across the city was that we were going to be late. Every red light caught us. Mario was nervous. The 800 metre was always the first event of the meet.

By the time our driver eased the bus into a parking spot on 76 Avenue and opened the front door, the track and field announcer's bullhorned voice was in the air. Mario was first out the door. He sprinted across the street, through the trees, into the track complex and all the way down to the high school where the race started. He got to the starting line. The gun went off. He won the race.

I happened to be back at Scona a couple of weeks ago. I measured the distance between the 800 metre starting line and the spot our bus had parked those decades ago. Mario ran an extra 300 metres that day.

It is a record that will never be broken.