A few words on the Saturday New York Times crossword 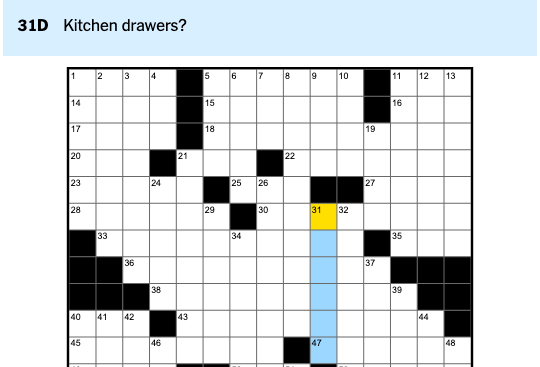 I am back in the grip of the New York Times crossword. I can't see if this will end happily. Seeing is my challenge, actually.

Take 31 down in today's puzzle, which I started last night,  Kitchen drawers?  Six letters. I immediately pictured the drawers in our kitchen and saw spoons, ladles, cheese graters and the rest of the silver mix of implements Shelagh uses to concoct the most delicious dishes, lately from cookbooks by Ottolenghi and Molly Yeh. I was off track. And stumped. What is another name for a drawer? Compartment, container, something that slides in and out, furniture, chest. Nothing fit.

Then I looked closer at the clue. "Kitchen drawers?" The question mark suggested some wordplay was afoot. Words can act like planks on a theatre stage, seemingly strong and solid enough to stand on, but also trap doors through which certainty disappears with a whoosh. Where you come down on this magic of words, the way they move and molt and mock, separates those who are thrilled by the whoosh from those who cry foul. This helps explain why puns produce such polar reactions in those who hear them.

Drawers. Drawers. Aha! Draw-ers, too. I was on the edge of my seat. Because draw also means to attract to a place. What attracts to a kitchen? (The instant I am writing this recollection at the dining room table I smell sautéed celery and onions from the kitchen where Shelagh is making a scrambled egg breakfast.) Smells. Aromas. The a in aromas fit with the third letter of 30 across, an eight letter word for Batman portrayer of TV and film: Adam West. POW!

Inside many of the most thorny New York Times crossword puzzle puzzles is the four letter word for prejudice in favour of or against one thing.

In a book called Thinking, Fast and Slow, the author, Kahneman, lists the number of ways how we think affects what we think. It's alarming. One of our afflictions is the availability bias, which, fundamentally, is the shortcut we take when we decide how true something is based on how easy it is to think of examples to back up our belief. A related bias occurs when people make decisions about how true something is based on how quickly they can come up with examples to support their case. Ease and speed take the place of analysis and imagination, and even empathy.

In the case of 31 down, a version of the availability bias blinded me to meanings of drawer beyond the obvious. A version. Aversion.

Here's the thing. The availability bias becomes something imperative to see for what it is when it ceases to simply be an idol of the mind trying to solve the Saturday puzzle, and becomes an obstacle to seeing each other against the bias.