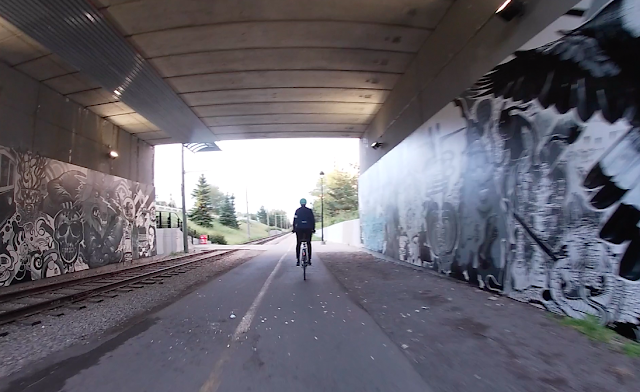 I want to tell you about Andy, but, first, I want first to try to explain why I didn't stop to clean up the shards of broken beer bottle glass on the shared-use path this morning.

I did see the shards. But I swerved, content not to hear from my tires the poof of rubber's deflating surrender to glass. I might have weakly dangled a left-arm warning to the bicycle rider behind me. That was it. That was the extent of my flaccid public spirit muscle flex. Having neatly navigated through the peril, I quickly forgot about the glass or how it might undo others. It was on to Coffee Outside in Faraone Park, a Friday morning meetup ritual with fellow bicycle riders. 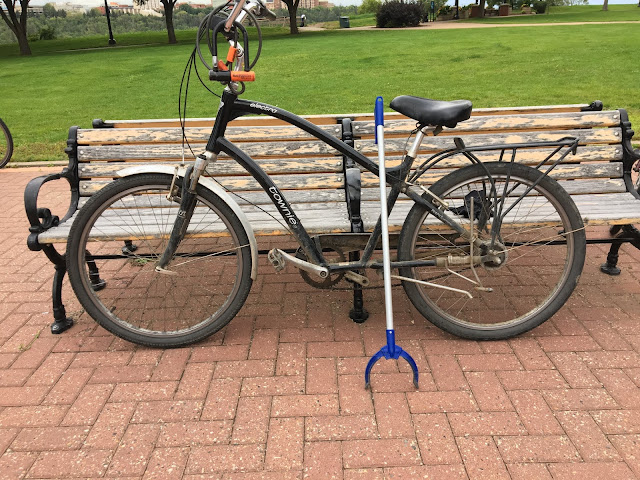 On the tip of the device is a retractable blue claw that, when triggered at the handle, squeezes closed, securing whatever is caught in its clutch. Andy deploys it stylishly and accurately—like a polo player swinging a mallet, or a knight pointing his jousting spear. Just like this scene from earlier this week on 105 Ave downtown:


That ding! at the end struck me like the bell in a boxing ring.

This morning, after an hour and a half of Coffee Outside story-swapping and coffee-drinking, we all said goodbye. A few of us, including Andy and his arm extension, headed north, back over the path I had pedalled in on and toward the jagged glass. It was all still lying there, like a broken mirror.

Andy stopped. He hopped off his bike, leaned the trash arm against the frame and, from his knapsack, pulled out a small whisk and dustpan. He crouched down and started sweeping up the bits of glass. For a few heartbeats, no one else moved. Then others joined the cleanup effort. None of us bothered to suggest that we call 311. Bicycle riders who rode by said thanks. It was a remarkable moment. 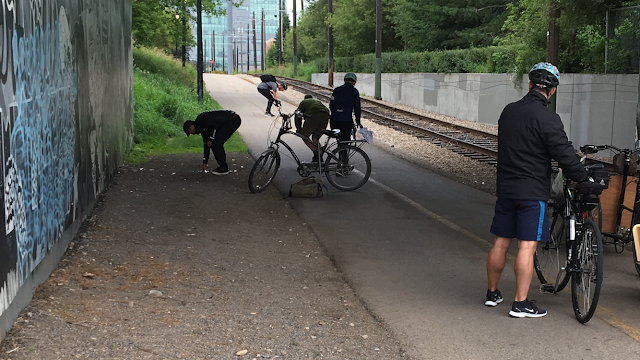 I don't know why Andy attacks trash and glass on the streets and paths he pedals. I have never sat down and directly asked him about it. I suspect he would find the question a bit strange. As if the real question is, why do people litter in public places and bust things up? or, why don't more of us protect public places? or, why do we assume someone else will clean up the mess? or, what happens to us when we act private in public?

Or: why is it that a bicycle rider like me typically stays in motion with the same speed and in the same direction and over broken glass on the way to Coffee Outside unless acted on by a greater force on the way back?

Thanks for clearing the path to an answer, Andy.