Some notes on Sibelius last night 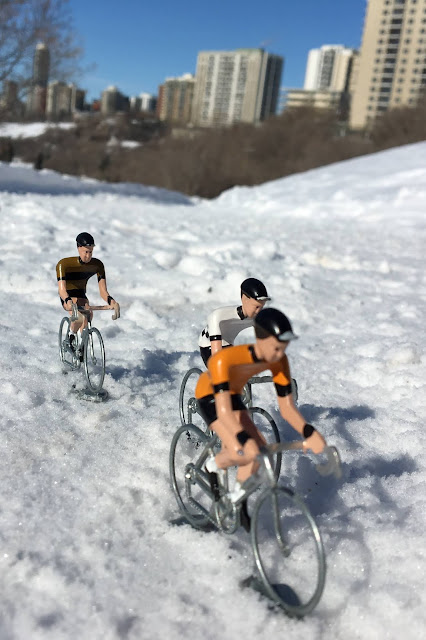 I woke up with sore chest muscles. I have no chest muscles, so this was a different feeling. It was the kind of discomfort that made me go back and conduct a mental inventory of anything done different the day before to have pulled things out of shape. I did go for a good bike ride in the snow yesterday. Nothing out of the ordinary there. At one point I did get off my bike and lie on the ground  to compose a low-angle pic of three miniature cycling figurines in Faraone Park. Kinda different, a bit chilly, but, really, nothing to have stretched my chest. I again didn't do any pushups on a day when I again didn't get to the gym. Nothing strange there either. So, what happened?

My chest this morning still registered the effect last night of my jumping out of seat C-138 in the upper level of the Winspear Centre, walking to the balcony rail and clapping, hands over head, and clapping harder, hands higher over head, while, below, Alex Prior and the Edmonton Symphony Orchestra received applause and hollers for the 45 minutes of Sibelius's Symphony No. 2 they had just pumped into the hearts of everyone there.

I don't know the musical term for the theme that comes back four or five times near the end of that symphony—the section where the strings rise and then the horns answer and it feels like you are being walked expectantly along a twisting path tight with snow-heavy spruce trees and then around a last turn and into an opening where there is winter sky and light above and swelling ocean on rocks below—but that glorious music comes from a place I am from.

I took a screenshot of my iPhone face at the instant, 10:06 pm, Saturday, March 9, 2019, those notes happened. I didn't know how else try to preserve the moment. The fourth movement they were part of went on for another 12 or 13 minutes, and then I clapped my thanks.

A thanks of nostalgia. Shelagh and I listened together to the Sibelius Symphony No. 2 more than 30 years ago, Leonard Bernstein conducting the New York Philharmonic into her apartment off of 107 Ave in Queen Mary Park. It was nice to be back together.

A thanks of gratitude. As the last note delivered a silence that left that same Shelagh in tears, Prior and the Edmonton Symphony Orchestra had sealed a Sibelius Festival that introduced us to music of ice and snow and life and death that I will go back to. The Symphony No. 4. Karelia Suite. Illalle. Kuolema. I will go back and find that swirl in Tapiola that, for me, for a flash, turned the Winspear and its decks of people into a kind of spaceship soaring through dark galaxy. I will return to The Tempest.

I clapped and and then remembered with a jolt how Prior had sent the audience into the intermission 45 minutes before. The orchestra had just finished two suites from The Tempest. Shakespeare's last play. Sibelius's last music. The No. 2 and all the applause was still on the other side of the break. Before drawing The Tempest out of his players for us, the maestro had told the audience he would like to try something different when the music ended: silence. No applause. Go to the break in silence. Go to the break, I took that to mean, without the sound of yourselves between your selves and Sibelius.


The audience complied. On our way to the lobby and talk over drinks and devices, we filed out like penitents in silence. It was a remarkable sound. I would later clap for that gift especially.

In the Sibelius Festival program, Prior wrote: "Sibelius brings us together, helps us find much in common with each other, helps us understand ourselves better, and inspires us to be our very best selves." Those soaring claims are either laughably audacious, or an unignorable challenge, a kind of  call to arms. After standing and clapping my chest sore last night, I know which way I am going.