I  cannot forget the price the guy sitting  behind the cash register in the now long-gone used book store near the south end of HUB Mall on the University of Alberta campus put on my nostalgia.

He took a quick look at the front and back of the album I had just handed him. His left thumb rippled the pages back to front. He was considering.

I met the valuation with a mask of nonchalance. Inside, I felt slight despair. I knew I couldn't afford 75 bucks for the Esso Power Player Saver sticker album. I had collected the stickers as a seven-year-old kid growing up in the NHL hinterland of Edmonton. Each packet contained six stickers of pro hockey stars: Orr, Perrault, Parent, Esposito, Keon and the rest of the immortals whose images were broadcast into our living room on Saturday nights, and who we pretended to be playing road and table hockey. I would coax my father and grandpa to gas up at Esso where they could then buy for me a packet or two. The stickers would be placed lovingly, and, invariably, crookedly, in the Power Player Saver album that was my proudest possession. I carried it with me everywhere. I then grew out of it. It vanished. I hadn't really thought about the album until the day as an undergraduate 15 years later I scanned the book shelves and found someone else's copy that cost 75 dollars I didn't have. 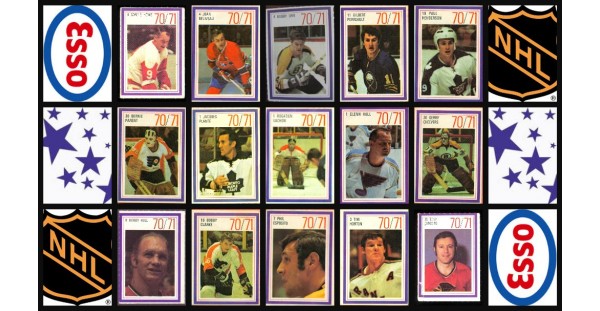 I didn't have time to start haggling over price. The used bookstore guy was already returning 25 cents in change, anticipating that I would pay him a dollar and we'd be square. I paid him a dollar and walked down the stairs, holding the album, feeling like a thief.

The second time I paid money to get back an artifact from childhood was three decades or so later when, working in a TV newsroom, and watching a story on space travel on the 6 o'clock news, I mentioned to a colleague that I used to have an astronauts lunch kit as a school kid. I treasured it. I was a child of the age of the TV space race. A couple of hours after I shared these memories, my newsroom friend Stefane found an exact copy, right down to the smell of the glass thermos, on Amazon.

I will not throw out the lunch kit in any of my future house, basement and garage cleansings because I now have a deeper and earned understanding of the importance of old stuff. Like the album, like the lunch kit, like the Miyata 1000 touring bike.

It was on one particular Saturday afternoon in those same TV newsroom days when I threw out my old Miyata. I once loved that bike. As a twenty-something, I pedalled it from Calgary to Jasper with friends. I pedalled it from Vancouver to Powell River, from Courtenay to Victoria and back to Vancouver with friends. On its saddle I learned about using gears and about keeping going and about moving slower and more meaningfully than I ever did or have in an automobile. It was a steel-framed companion that introduced me to the egalitarianism of riding a bicycle: the person doing the work is the person enjoying the freedom.

I let it slip away.

Actually, I threw it away with my own hands.

For years, the Miyata had hung unused on the garage wall behind the house Shelagh and I and our two boys shared. Like a weird sculpture the bike stared at me, without much of the artful bicycle rider left in me to accept its interrogation as I parked the car. Life in the TV newsroom was fast and relentless and challenging and, at times, scarring. I was a young leader without much skill at being a leader. I was a casualty of the runaway speed of the news manufacturing business in the age of the internet and social media. An electronic media man to the end, I was burning out. I couldn't slow the pace of it, so I compensated by making space, not in my heart, but in the garage. That's how, in a fit of cleaning fury, I threw in a dumpster the bike that I no longer had the time or the inclination to make the time to ride. I felt a prick of remorse as the frame landed in a poof of dust on top of some old drywall slabs.  I covered it over with a tarp.

The next day the dumpster was hauled away and the Miyata disappeared from sight, and from that exact moment a clock started counting down. It took a few years to tick down to my even thinking about the Miyata again. And it kept ticking until I allowed the remorse to surface. A couple of years ago I started admitting my crime to friends. Tick. Tick. Tick. Then, this fall,  I saw a vintage Miyata 610 from the 1980s locked up near Redbike in Edmonton. I looked around. Its owner, Terry, from Revelstoke, noticed my noticing, and we talked about Miyata touring bikes as the sun set. I would admit to him only that I used to have a Miyata 1000 back in the day. He didn't pry.

Whatever clock was ticking kept ticking. My buddy Alan could hear it. He found a Miyata 1000 online in Ottawa, and cast it as a quest. 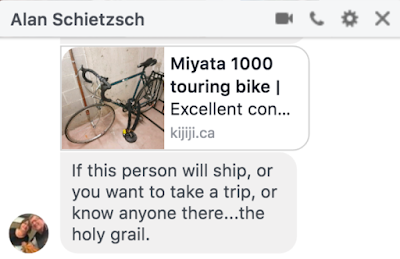 I inquired. No response. Then it was gone, sold in a day for $500. Now there was momentum.

Last month I found a Miyata Six Ten touring bike, 24.5 inch frame, good condition on Kijiji—in Calgary. After a week of emails back and forth with the seller, and more guidance on Facebook Messenger from the wise Alan, I found myself standing in a parking lot outside the Boston Pizza at Westbrook Mall watching the wind spin madly a Tim Hortons cup counterclockwise on the asphalt. Shelagh sat in the car holding an envelope of cash. The seller arrived driving the colour of SUV he had indicated and wearing the colour of ball cap he had indicated. In small talk, we determined we had been at the same Roger Waters concert in Edmonton a year ago. I got on the saddle, pushed off, wiggled my running shoes into the toe clips, shifted gear levers on the down tube. Click. Click. Whirrrr. I smiled the bruised smile on the other side of experience. Shelagh paid the $345.

It's not a Miyata 1000, but it's a Miyata, and it's beautiful and it's in great condition. I am grateful for another chance to ride a bike with a wheel base set up for hauling stuff on the open road.

I have a few decades of stuff that it will carry.