The point of no returning 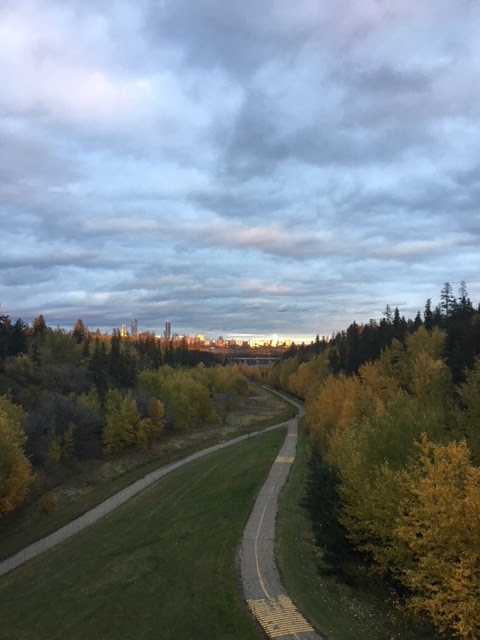 I have a slightly annoying mental habit of replaying, as I ride my bicycle home after occasionally complicated work days, the conversations of those work days, or, worse, fictionalizing them, pretending that I had made this excellent point to that person or imagining how I had delivered this effective line to that person, until, soon, the rut my thoughts run in takes the shape of a loop that shuttles a chain of replayed or imagined conversations back and around and down and back and around again in what is, believe me, a slightly annoying mental habit.

This is why I have a point of no more returning—the point on my commute home where I insist on letting the day's back-and-forth break into pixels and blow away. For me, this point is the 142 St bridge over the MacKinnon Ravine.

On those days—they are not many, but they do occur, they do recur—where my bicycle components abet in my slightly annoying mental habit, the 142 St across the MacKinnon Ravine is a kind of enforced reminder to consider higher things.

This was how it happened.

And I was reminded of why I ride a bicycle at night.

It remains thrilling to pedal in the city with its system of streets, its streetlights in a row, its trees just so, its lane markings and its traffic signs exactly where they should be, and then to escape this organization in a glance up into and contemplate that other realm, from which there is no return, and to realize, yes, but not yet.