See you at home! 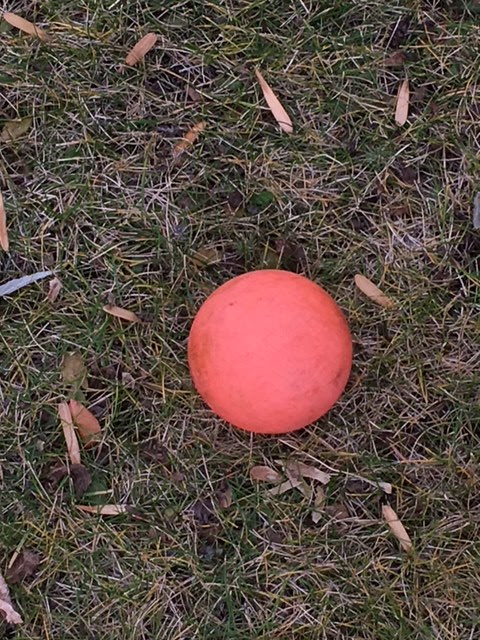 "I'm gonna stop for some groceries," Shelagh said. "See you at home."

We were leaving, she in her little car, me on my bike, after having coffee at Iconoclast by the graveyard this morning.

I got home first. To a locked house. Unless I have to, I don't carry keys anymore. I still can lose keys if I don't actually have them on me, I have proven that. But it is more difficult. I took my phone out of my pocket to text Shelagh and get her ETA. Dead phone.

Locked out of house and phone, what do I do?

For whatever random reason, my first thought was to pedal to Meadowlark Mall and go to Tokyo Express for a double chicken rice bowl, with skin. Why this came to mind I have no idea. Then I saw the orange plastic ball by the stump of weeping birch in the middle of the back lawn. I keep the ball there on purpose. It's a reminder of boyhood. We used those iconic balls to play road hockey and indoor ball hockey and we also used them to play baseball at this time of year. The field behind Mitch's place was too small and too close to houses to use a real baseball, so we transposed the danger down a key by using the orange balls instead.

There are no laces on an orange plastic hockey ball, but we believed we could throw sliders and fastballs, curveballs, Valenzeula screwballs and Niekro knucklers all the same. And we were right. We played for hours. We did our own play-by-play.  Tony launched tape-measure homers into neighbours' backyard gardens, into which we'd have to go to retrieve the souvenirs. If I could float back in time over one scene from my youth, the field with the wooden retaining fence we imagined to be the old Yankee Stadium or Dodger Stadium or Wrigley Field, the paltry field behind Mitch's place, I mean, is where I would hover. Keeping an orange plastic hockey ball in the back yard is the closest I can get to there.

I picked up the ball, tossed it up, caught it without looking in my right hand, and noticed the garbage pails Shelagh had placed by the fence. I carried one to the back of the yard by the fence and plopped it down bottom side up. I noticed the overgrown hops on the fence and I felt I was now somewhere else. I walked back and picked up a garbage pail lid and walked back and placed it in front of the plastic pail. It became home plate.

For the next 15 minutes I made up and refined a one-man game of baseball in which I, as pitcher, hurled the orange plastic ball at the upside-down pail. Hitting it was a strike, missing it a ball. Hitting it with the first pitch after after a four-ball walk was a double play. Throwing four balls in a count that included at least one strike was a hit, in which case I could record an out by tossing the ball onto the house roof, and, while it rolled down, spinning around twice, closing my eyes, opening them and catching the ball with my left hand before the ball hit the ground. A ground-rule double for the imaginary batting was the result of an even more complex storyline.

Like the bicycle helmet placed cavity open in the style of a catcher's mitt when the call was a sinker. Hitting the helmet with a pitch meant an imaginary runner on imaginary first base was thrown out on an attempted steal.

Like the old red bat I also keep within reach in the backyard which, placed across the top of the garbage pail, and if hit by a pitch, was a grand slam for the pitching team.

When Shelagh opened the back door to say sorry for forgetting I was locked out, my team was losing
2-0.

On my way into the house, I looked back onto the abandoned scene, colours of autumn on the ground. And at the black garbage pail lid, the overturned pail, the bicycle helmet, the bat laid across the top of the pail. Until that instant, I hadn't noticed it wasn't just an black lid, an overturned pail, a bike helmet, a red bat on top.

It was a wonky sculpture, too. Dedicated to diamond days. ⚾