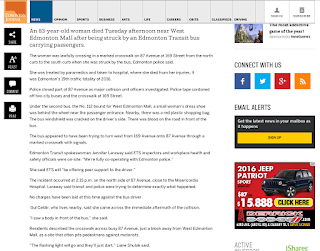 An 83-year-old woman was killed while walking in a crosswalk in west Edmonton last week.

For her efforts, she was rewarded with a couple of curious streeters in a first online  Edmonton Journal story.

Streeters, in the reporting industry parlance, are quotes from people who don't know what they're talking about. Okay, that's the critics' view. But the truth is the critics are often the very same reporters assigned to get streeters to fill out their stories with quotes that can add colour and personality—and length—to their news accounts. Streeters can be entertaining and they can be informative and they can be startlingly out of context.

Startlingly happened in the account of the woman's death. Here was the first reported fact in the story:

An additional fact came next. The woman was not in the wrong place, according to police.

After the officials were interviewed for the facts known at the time, it was time for the streeters.

It's worth making an obvious point. Whatever Liane Shulak and Donna Krause were talking about, they weren't talking about the facts in front of them. Unless the police were not forthcoming (always a possibility, but unlikely in this case), the now-dead senior citizen did not just dart across the road. And, contra Donna Krause, the woman did not illegally cross with an attitude that nothing could happen to her.

Now, it shouldn't be news to anyone that people have all kinds of opinions.

But including those two opinions inches away from the facts of this particular case conferred on those prejudices a status they didn't deserve. An investigator charged with, or a reader wondering about why this particular disaster happened would be laughed out of undergraduate logic class by saying pedestrians supposedly think nothing can happen to them there.

So, how do ill-informed opinions that contradict the facts presented in the very same story rise out of the category of troll remarks and get included in the first pass at the official record? There are a few possibilities.

First, it's not such a high test after all. To get quoted, you merely need an opinion and to provide your first and last name.

Second, there is a bias toward automobile-versus-pedestrian streeters. It is a wedge issue in this city. Conflict sells. We all love to have our opinions reflected back at us. This is identity reporting.

Third, there really was some design to it. Let's give the benefit of the doubt here and say the reporter and editor wanted to obliquely shine light on nonsense. Maybe. To me, it just doesn't feel like it.

The story has forked since the first day and it now centres on whether new transit buses have blind spots so big they can contribute to fatal collisions. Agree or disagree, this focus on design is better than reading ill-formed streeters.

There is one other bit of Journal reading that should be required: 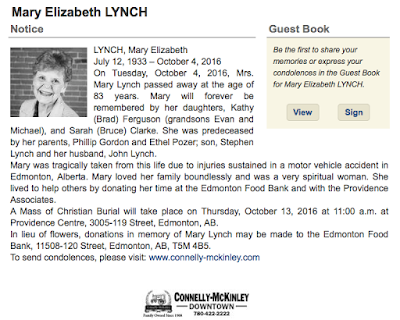 The family is asking for donations to go to the Edmonton Food Bank.