I, I wish I could swim like the dolphins can swim.

I thought it peculiar that Bowie somehow had an actual age. David Bowie, 69, the news said. That struck me as very earthy. And wrong in a way that can't be fixed as far as we know. And then as quite understandable given Bowie's mediated and ageless presence.

My friend David Blatt gets it right with this memory of growing up in Edmonton and learning about David Bowie. And trying to get a glimpse of yourself in the mirror after learning about David Bowie. Of all the automatic bleat written about Bowie's legacy, Blatt verbs the truth. Bowie thrilled and confused and slightly frightened us. Thanks, David. 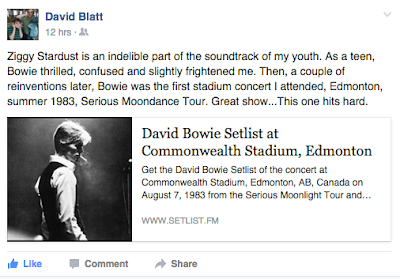 "Bowie news makes me sad,"  I wrote another friend on Twitter. "But want to live." Not sure where that "but want to live" came from. It wasn't there when I started writing the first sentence.

When I got home, Shelagh had already found a YouTube recording of Bowie's first Edmonton concert. It is the lowest quality video of any that I have seen today, but we watched a big chunk of its two hours worth of single-shot, over-the-mullets point of view because it was from here. It is ghostly.

The harsher, more uncanny fact [is] that all communication via media of transmission and recording (which have come to include our bodies and souls) is ultimately indistinguishable from communication with the dead, says John Durham Peters in Speaking Into The Air.

And I wonder why the actual death of someone we have never met, whose music we can continue to experience via ghostly recordings as we always have, matters? There is the nostalgia, yes, and the fact that gone, too, is our youth and it is delicious in a way to still be here to contemplate its vanishing. But is Bowie's death really about us? That strikes me as Hobbesian in its selfishness.

No, I think we are also sad because his body is gone. His genius was embodied. Though his voice and his image could be everywhere at the same time, he, himself, could be in only one place at one time and those who saw him live experienced that, and that is what is no more. Now it is records.

I wonder if in those modern, moving images of Bowie there is actually no sign of life, and whether, like conjurers immemorial, they are just the power to charm? And I wonder if he taught us to see that the modern is what walks beside and walks on by and does not touch? That the film is a saddening bore because we've lived it ten times before? And that we shouldn't fall for that?

"Up until at least the mid-70s really felt like we were still living under, in the guise of a single and absolute created society where there were known truths and known lies and there was no kind of duplicity or pluralism about the things that we believed in. That started to break down rapidly in the 70s and the idea of a duality in the way that we live. There are always two, three, four, five sides to every question. That the singularity disappeared. And that, I believe, has produced such a medium as the Internet, which, absolutely, establishes and shows us that we are living in total fragmentation." - Bowie, 1999, in interview with Jeremy Paxman.

Here is a fragment from Michel de Certeau on tactics:

A tactic insinuates itself into the other's place, fragmentarily, without taking it over in its entirety, without being able to keep it at a distance. It has at its disposal no base where it can capitalize on its advantages, prepare its expansions, and secure independence with respect to circumstances. The "proper" is a victory of space over time. On the contrary, because it does not have a place, a tactic depends on time—it is always on the watch for opportunities that must be seized "on the wing." Whatever it wins, it does not keep. It must constantly manipulate events in order to turn them into "opportunities." The weak must continually turn to their own ends forces alien to them. This is achieved in the propitious moments... (The Practice Of Everyday Life, xix).

And, speaking of the oddity that is space to those without power, here is Bowie, on time:


Though nothing, will keep us together/
We could steal time/
Just for one day/
We can be heroes, for ever and ever/
What d'you say?