LeBron James And Phil Everly And Me

December 30, 2015
There is a thing that happens, and it needs a word, and that nameless thing is what happens when two pieces of media intersect perfectly in an instant in the same person. 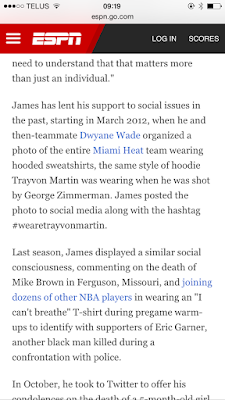 On my phone I was reading LeBron's explanation for why he hasn't spoken out about the Tamir Rice case. Rice is (I paused for a second over that "is" given that he is dead and so should the verb be "was?" But the record of people stay with us longer and in intriguingly real ways these days, so "is" it is ) the forever 12-year-old boy killed by Cleveland police who had thought his gun, a toy replica without the orange safety tip, was real. Earlier this week, a grand jury declined to indict the white police officer who pulled the trigger on the black youngster.

The ESPN article explained that LeBron did make a public stand in the deaths of Treyvon Martin and Michael Brown. And in the case of Eric Garner, killed in a confrontation with New York police, LeBron joined dozens of NBA players in wearing an "I can't breathe" T-shirt during pre-game warmups. Those three words from Garner, his last, were recorded by a witness with a smartphone as police were arresting Garner for suspected cigarette-sale fraud in Staten Island, using, depending on your definition of a chokehold, either a chokehold (critics) or not a chokehold (the NYPD police union). 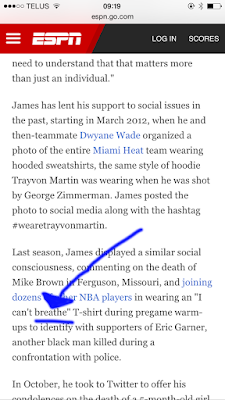 From the Bose in the kitchen, streaming from 1973, Phil Everly was singing the Albert Hammond hit The Air That I Breathe. It was gentle background noise, the lyrical testimony about not needing anything (including cigarettes), until Everly's "breathe" and the ESPN "breathe" happened at the exact same time.

The immediate effect was a sensation of surge, something like an invisible wave that collected force as another swell joined it and then, just as quickly, the feeling of a wave breaking up as the pixelled word "breathe" was left behind as my eye moved left to right and the sung word "breathe" vanished as evanescent notes, even recorded evanescent notes, do.

Under analysis, it was a collision of past and present, a mash of a manner of print with a manner of music. After thinking about it for a moment, it was a kind of printersection.

A kind of audiograph, perhaps.