I Ran Into Hermes On The Road

I don't ride my bike all over the place because it's ecological or worthy. I mainly do it for the sense of freedom and exhilaration.
- David Byrne


These are preliminary notes on what a different kind of traffic app would feel like. Different because that old coder Hermes isn't in on the development of this one.

The cunning Hermes, as Lewis Hyde has shared, has enjoyed quite a life. Wherever trade and exchange and money and the movement of merchandise need protection, he is with us still. Here is Hyde from The Gift:


If we imagine an ancient road at dusk, a road passing through no-man's land and connecting two towns but itself neither here nor there, we will begin to imagine the ancient Hermes, for he is the God of Roads, identified not with any home or hearth or mountain but with the traveler on the highway.

Hermes, says Hyde, is present wherever things move quickly without regard to content. It is the movement of the content that counts. "When he's the messenger of the gods he's like the post office: he'll carry love letters, hate letters, stupid letters, or smart letters. His concern is the delivery, not what's in the envelope." And the ancient roads are with us still.

Hermes is the neutrality in net neutrality, the free in free speech. Hermes is Alan Jackson, crazy 'bout a Mercury, cruising it up and down the road. This is the interface of Hermes in our time:


Red is a clogged street, yellow means traffic is moving slowly, and green indicates traffic is flowing freely. The modern traffic map aims to get the automobile driver from A to B with a minimum of interruption. If there is a stall in the curb lane, he is advised to stay left. If there is a collision in the intersection, alternative routes are offered. Red is bad for bank robbers and bank bosses alike. Lost time is money.

The logic of the real-time traffic map is the logic of the 20th century urban transit engineer, the one who, according to a recent article in the New York Times Magazine, "thought less about the pedestrian experience and more about saving money, by saving time, by speeding movement, by enabling cars. They analyzed traffic flow, the backup of cars, stoplight times and right- and left-hand turns, all in an effort to keep vehicles moving freely and quickly through the city."

The assumption is that all travel time is a waste of time, Zhan Guo, a professor of urban planning and transportation at New York University, told the magazine.

That assessment is worth stopping at, backing up, and looking at again in slow-motion italics.

The assumption is that all travel time is a waste of time, Zhan Guo, a professor of urban planning and transportation at New York University, told the magazine.

What counts in this view of the world is how to most frictionlessly get from A to B. 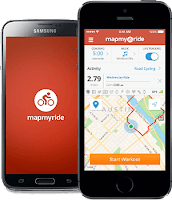 At this point, though, let's consider the possibility that the Hermes-worshipping traffic appmeisters of
Apple and Strava and Glympse and the rest are delivering quite an enjoyable experience inside quite a fallacy: data are measured not because they are important, but, rather, they are important because they can be measured. We are made to measure, it appears. Our technological time is measurement of the people and by the people—and for the people to purchase.

The bicycle can confound this whirled view.

Like the pokey pedestrian, the bicyclist doesn't quite fit in the traditional traffic engineer's view of the goodness of speed. Yes, the urban commuter on two wheels also wants to get from A to B, and deserves to be able to do so safely, and all the effort now being aimed at achieving those goals, and, in the process, ignoring the noise from the congenitally angry, is commendable. And, yes, it is understandable and strategic and very reasonable to make the case for bicycle commuting in the language of the transportation planner. This talk is everywhere in the air these days. It is a reaction to the reaction to the good-old-religion days of bicycle advocacy, when the arguments aimed at those to be convinced made them feel judged, or fat, or lazy, or stooges of the automobile culture. The implication was you were on the wrong side of history if you voted against a vision for—and painted, protected asphalt for—urban bicycling. No one likes to be told they are dinosaurs. It's been a long time since happiness was effective currency in political exchange.

I think this starts to explain why those who support doing-bicycling are beginning to make inroads, finally. We are using the language of the mighty. We talk more about cycling as the best way to get from A to B. We measure it in various ways. We plot our paths on GPS devices and text links to those watching.  Today, I made it home from my parents' place in the northeast end in 56 minutes, a new record. We don't preach. We border on the blasé of it all. And so on.

I am not suggesting that we break what is fixied, but only that we remember and stay true to the actual experience of being on and balancing on a bicycle, and the way that that combination of two triangles and two circles opens us up to the shape of things.

Like the tufts of spruce needles on the very points of the trees just on the side as you pedal across the Mackenzie Ravine bridge. Or the blue flat on the right foot of the woman who has stepped down off her pedal while the traffic flows by on 109 St on a weekday morning. Or the cough of exhaust from the tailpipe of an idling Cadillac in the Howard & McBride Chapel Of Chimes Funeral Home parking lot on 102 Ave. Or the running boy on Saskatchewan Dr. as he launches himself with his left leg up and into the air off the bus bench and hangs there forever until landing a second and a stride later.

On my bicycle, there is an alphabet between A and B, and it is hard to quantify, and it is there.

Which brings me back to that app.

What if I could during my ride register the number of times I smiled or hummed or had a thought that would never have come if my legs weren't turning? What if the app I am thinking about recorded the laugh that met the sight of the fog crawling up the MacKinnon Ravine? What if the buildings that glided by, the trees that whispered, the river that churned, what if the wind that escorted, the rain that punctuated, what if the click of the gears, the bite of the tires, the crunch of the snow, the silent scan across the bar code of shadows of elm trees and houses and light poles, what if the Chianti neck visible in back pannier, the sight of construction workers putting their helmets on in perfect unison by a bench on 104 St, the fanfare of the blooming tree at the end of the alley off 124 St, the swoosh of the magpie lighting on the fence rail in Glenora, the scratch of overhanging pine needles on the top of my helmet, the memories of Highway 1A, the songs from Rush, the old green 2-speed, the stolen Sherpa road bike, the Miyata 1000, the boys' first bikes still in the garage, what if all of it—all of it—could be captured by this app that I am imagining? What if, instead of revolutions per minute and watts and kilometres travelled and a legend of traffic flow ahead, what if instead of the weather down the road this app could register the other real things?

What could Hermes ever say about that?