June 23, 2014
One evening in a fourth-year seminar on Plato's Republic that I eavesdropped on, our political science professor, the bearded, vested, clear-eyed Leon H. Craig, held the Bloom translation and nodded his head and proclaimed with a voice youthful and knowing, "And that is what is meant when the Greeks said 'like to like,'" and those in the room who understood also nodded their heads and scribbled in the margins of their Bloom translations, and Athens was briefly restored on the 11th floor of the Tory Building on the University of Alberta campus.

If I understood then, I don't understand know, though the epithet has burrowed into my brain, and I try to riddle out its meaning often. To escape the pain of knowing that I don't know what I might have once thought I knew, I have morphed it into a more easily, though less Greek version: bike to bike.

Bike to bike means a lot of things, but, to me, it basically means that if you ride your bicycle to work, then you understand people who ride their bicycles to work. And you somehow find each other.

That's what has happened with a group of round-the-calendar riders in Edmonton who get together to drink beer and swap stories from the saddle and try to figure out the best way to present our wheels in the public square. We tweet under the #yegbike hashtag. It's a group of diverse riders of different skills and backgrounds who want others to know it's fun to ride and want politicians to know it can be safer in big and little ways. It's a group that knows automobiles are here to stay as long as the fuel holds out, a group that senses that what makes for a great city is, in part, its ability to reflect the diversity of its citizens and the diverse ways they choose to move.

The first step has been to learn more about who rides Edmonton's not-always-bicycle-friendly streets. If you are one of us, here's a quick, cool questionnaire. We have organized and pulled off a Coffee Ride through the rain with Ward 1 Councillor Andrew Knack. The good people at Metro News have been quick to devote some of their newspaper space to us. It's been a fun month. Fun.

The bike to bike sentiment and the community it engenders also explains why it's hard to hear that one of the #yegbike riders broke his arm in a recent infrastructure-lacking tangle with a vehicle and a too-narrow escape route in a construction zone.

This is what that looks like before the pieces got put back together: 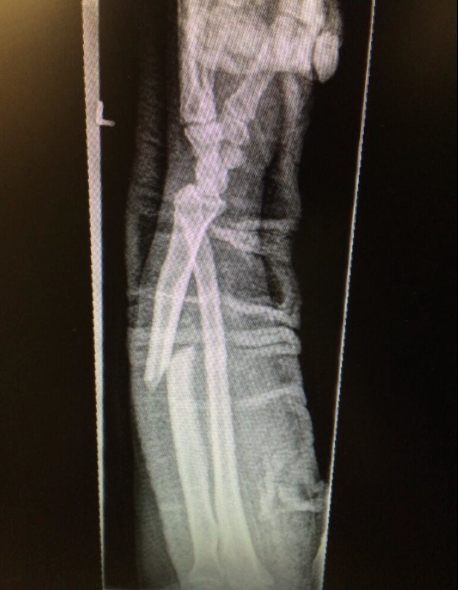 That arm has been attached to a bicycle handlebar for about four decades and it's the first injury of any kind in that time, and it will be back on a handlebar as soon as nature says yes, but probably before.

His inspiring, two-word message to the rest of us after the collision was simple: keep riding.

And, so, in the misappropriated spirit of the Greek classics I studied, it is of arm and man I sling! It is a battle out there on the roads sometimes, an odyssey just to get home safe.