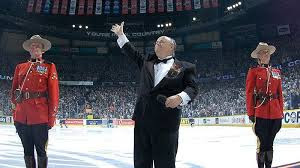 Paul Lorieau, the tenor who could make you forget there was a faceoff only a minute or so away, has died, and Edmonton today is full of stories and memories of the anthemic voice for decades of the Edmonton Oilers.

In the Oilers' 2006 Stanley Cup run, Lorieau left us spellbound with his raised microphone, an invitation to the fans, so rousingly accepted, to sing the national anthem together.

Think about that for just a second. The trained voice, the student of voice, the artist with the camera trained on him freely chooses silence, so that the full-throated, beer-holstered hockey throng could experience the joy of singing themselves into a northeast Edmonton night.

Now, we contemplate the meaning of the silence choosing Paul Lorieau.

Countless times on TV and many times in person in the Coliseum I experienced Lorieau's singing O Canada. Once, I met him.

It was on a small rink that a band of friends at CTV Edmonton (Hoop, Raymo, Dub, Kobes)  watered into being on a lovely piece of land behind the newsroom. We called it the Rink of Dreams. And on "opening night," Paul Lorieau came to sing the national anthem. But before he did he sat in the newsroom with a scarf protecting his neck and he tried to teach a few of us about the colour of sung notes. When he ventured outside and, with winged snowflakes spiralling around him, delivered the anthem, man, it forced you to believe. And to consider that a live performance is not just not a recorded performance—it can actually make you feel profoundly alive.

"Being three feet away from that," said entertainment reporter Graham Neil at that moment, "is quite an experience."

We paid him a honorarium. He sent the money to a convent.

Paul Lorieau dealt in sound, that perishable, evanascent sense that, unlike seeing and vision and video, still resists dissection and stabilization (Ong). Perhaps, that is why it feels like such a transport to be in the power of the singer.

Where did he take us?

Indeed, where did he go?

I somehow think that the death of a singer helps make a place a place, helps impel us to come up with ways to make the gift of his time with us stand still.

Now, there will be larger gestures, but maybe that same Rink of Dreams—that patch of ice protected by a stand of trees, that place where under the stars you can see your breath and feel like you understand the poem of it all—should, this winter, be renamed.

Share that night on the Rink of Dreams. Copy and paste http://edmonton.ctvnews.ca/well-known-anthem-singer-paul-lorieau-passes-away-after-battle-with-cancer-1.1351812 and then click on "Paul Lorieau's Rink of Dreams Anthem."