It stands the test of time is a lovely cliche. Six one syllable words, some alliteration with all the t's. Behind its rhythm of short/long, short/long, short/long is a cruel truth, or the truth of cruelty. Entropy, it's called by the scientists, the gradual decline into disorder that befalls all that stands, underlining, in the process, the radical accomplishment of actually standing, even for a time. To keep standing is somehow to best time itself. If I remember right, it's part of the reason the Romans disdained to lie down.

Paul McCartney was in town last night. He plays a second sold-out show tonight at the old Northlands Coliseum. (Actually, he's on stage right now.) Among the many cliches ushered onto the stage of watercooler talk today in day-after reviews was that the former Beatle, former Wing, the poet who gave us Hey, Jude has stood the test of time.

And it's hard to argue as we listened to him sing Got To Get You Into My Life or Eleanor Rigby or Get  Back or All My Loving or the 35 other songs he sang last night. Hard to argue when you heard him pick the notes to Blackbird. 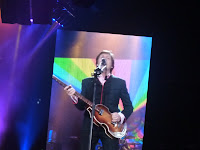 From our seats we watched his impish image projected on giant screens, recalled that same mischievous manner from the Ed Sullivan Show and concluded he has somehow managed to escape the pull of time.

Of course, that's not true.

Paul is 70 now, six years down the road of the unimaginable scenario of When I'm Sixty-Four. He is Sir Paul now. His voice is strong, but not as strong as. He tells stories of 30 years ago. He moves well, but he is efficient in his movements.  He has remarkable stamina that is remarkable, in part, because of his age. He jokes about a weak heart after the pyro of Live And Let Die.

But it was great for a reason other than seeing McCartney transform before our very eyes from a media-fed image on our inner screens, from an icon of photos and album covers and movies and art into a real person standing there on stage, playing that Hofner bass.

It was great for a reason beyond warm memories like Shelagh's -- "We would listen to this song every day after school in Grade 6!" -- as Band On The Run changed tempo for the first time with that gorgeous acoustic guitar strum.

It was great not just because it gave us something to talk about, or a way to feel 16 again. Yes, it was great because we shared three hours with a historical figure, the poet who was there in the 60s, was there with John Lennon. But that's not all. 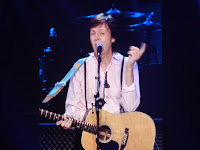 The songs of McCartney, of Lennon-McCartney, the bards of Liverpool, have a remarkable re-generative quality that keeps them out of cliche. It's the songs, the songs that stay new, even as we get old. (As impressive a proof of that as were 18,000 fans last night, just as impressive, and just as poignant, is what is happening this evening down the hall as I write. Behind his bedroom door, Mikey has traded his poetry assignment for his electric guitar and is playing If I Fell In Love With You while his mother sings in the kitchen.)

So, it's no wonder that seeing McCartney struck so many of us as dreamlike. The surreal happens at the intersection of time and the timeless.

I've just seen a face/
I can't forget the time or place/
Where we just met. 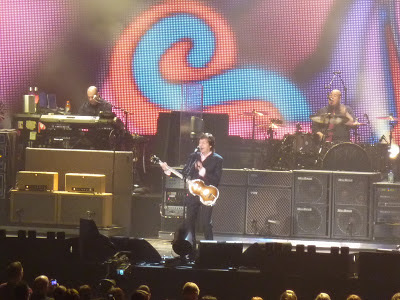