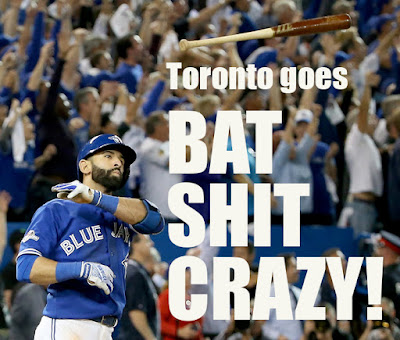 The 7th inning, three-run homeroics of Jose Bautista in Game 5 of the ALDS against the Texas Rangers, and the iconic bat flip shared around the Twitterverse, was the third weird thing with a bat to happen that game.

In the top of the 5th inning, Delino Deshields, Jr, took a 91-mph offering from Jays pitcher Marcus Stroman in the teeth after a #buntfail deflection off his own bat. And into his own face. His pathetic look of bewilderment was recognizable to anyone who hasn't seen that their own meticulously planned move will explode, immediately upon being put into action. In their own face.

Then in the top of the 7th, the bat again took centre stage, as Ranger Rougned Odor came home when Jays catcher Russell Martin's toss back to the pitcher struck the bat of batter Shin-Soo Choo and rolled live into the near infield no man's land.

And then it was Bautista's bat flippant.

Crazy bat shit, yes, in centre of the basebaltered universe.

In Game 1 of the American League Championship Series against the Kansas City Royals, Bautista was again good for the image machine. 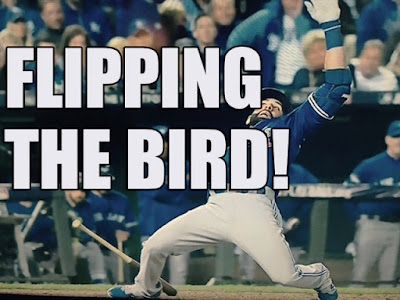 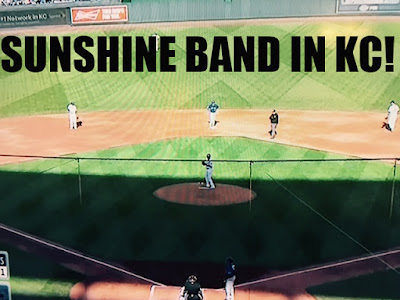 *
Game 2 also featured a tremendous play from the brain and glove of Royals shortstop Alcides Escobar, who dove to smother a bullet from the bat of Russell Martin for one out and then tossed the ball to second base to double up Edward Encarnacion, who can be forgiven for so believing the ball would not be caught that he's not even in the picture. 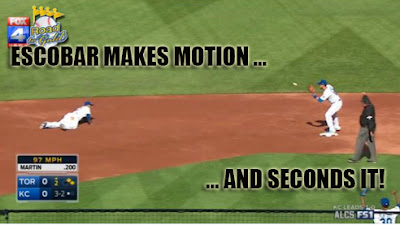 In the bottom right corner of the image, you can see the hallelujah arms of pitcher Yordano Ventura.

Jays ace David Price was cruising along with a 3-0 lead, doing everything a mortal pitcher could do to get the win, when a crack opened in the vault and down came the grave judgment that Ryan Goins and Jose Bautista would watch a blooper from Ben Zobrist drop between them at 9.8 metres per second per second base. 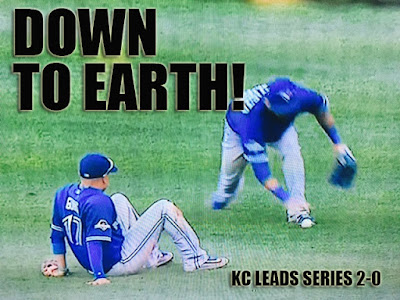 And with that plop, the Jays fly home north against the current.

Back in Canada for Game 3, Marcus Stroman took the mound and his rebuilt knee took the pressure on a night Liberal leader Justin Trudeau took the land. The Jays won 11-8 and cut the Royals lead in the series in half, with the next two games in Toronto. The three-run home run by Jays shortstop Troy Tulowitzki in the third inning suggested a bit of an epic theme. 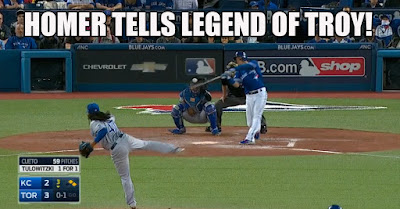 As did Tulowitzki's ejection, in the top of the 8th inning, at the hands of hectoring umpire John Hirschbeck. 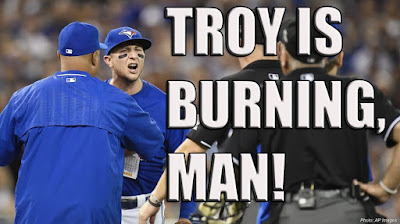 For Jays fans, Game 4 brought into some focus, for the first time, the dreadful vision of loss. R.A. Dickey brought a broken knuckleball to a first-pitch-hitting KC Royals squad and he didn't live to see the end of the second inning. Final score: 14-2. It was the bad stuff of legend for the 40-year-old Cy Young winner, who was the Jays best pitcher in the second half of the season. 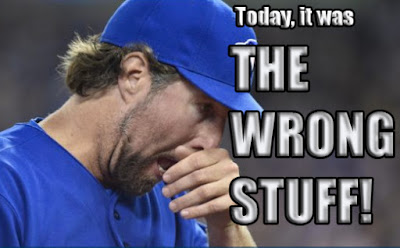 It was tough to see unfold. Or unglue. Or unravel. After watching the team post 11 runs the day before, and, perhaps, selectively forgetting the Royals rally to get within three runs that game the day before, fans in Toronto now face the spectre of, well, the Leafs. I imagine there was enough pain in the Rogers Centre that they could have easily handed out bottles of the Joe Carter-sponsored glucosamine chondroitin tablets to everyone in the hurting joint. 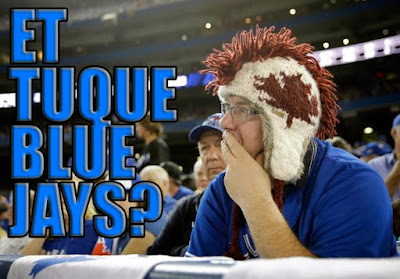 Game 5 belonged to Jays pitcher Marco Estrada. When manager John Gibbons came to collect Estrada with two out in the 8th inning, the right hander had allowed only three hits, one run, had struck out five, walked one, and, had ensured six, as in Game 6 Friday in Kansas City. 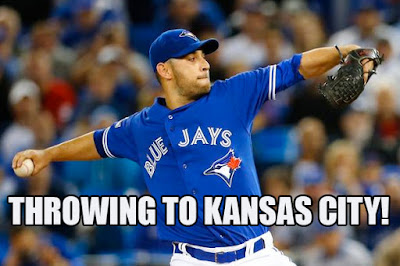 In the news conference after the game, Gibbons had a lot to say about Estrada's command and his stuff. But what he said to his pitcher at the mound in the moment he sent him back to the dugout, what TV viewers could see as a mouthed tribute, was less scientific, less analytical, but just as accurate: "Wow!" 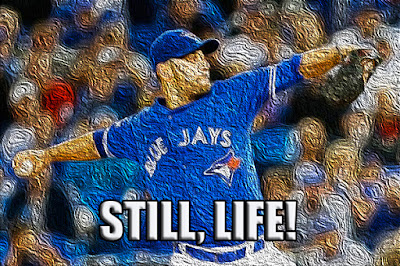 It's the thing you say when you see a work of art.

And, it's over. This morning, the morning after the Jays left 12 runners on base on their way to a 4-3 loss to the Kansas City Royals, it is over. But not before a kid with a beard and a glove caught a ball in play that was ruled a home run. 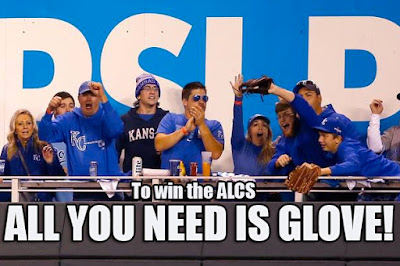 And not before Bautista served up a two-run homer on cue to tie the game before a rain delay. 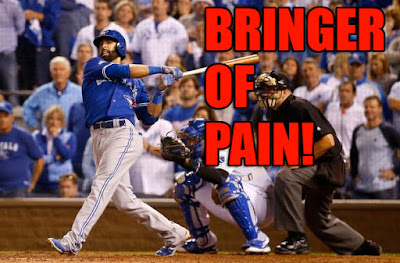 And not before Revere tracked and jumped for and snared a ball that would have undone lesser left-field minds. 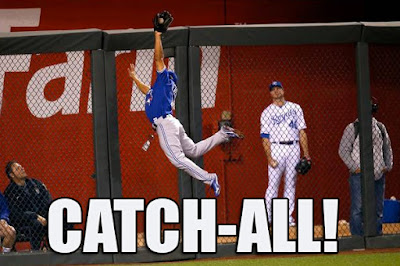 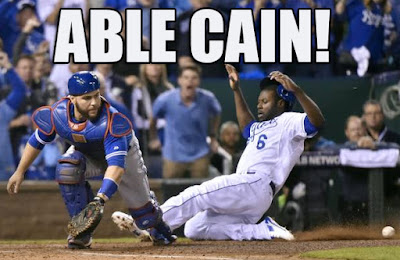 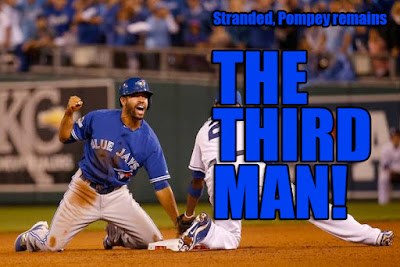 It was a remarkable ride. We were part of it, watching the Jays play in person in Seattle this summer (Bautista homered to left field) and watching on TV for much of the rest of the drama, including the bat flip. That will be impossible to forget. In the end, though, a playoff run that got supercharged with that bit flip ended with Donaldson being thrown out by Mike Moustakas. In the end, though, there was just 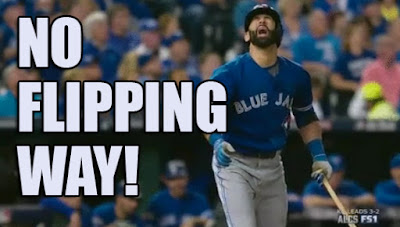 But it was flipping fun. Thanks, Jays! 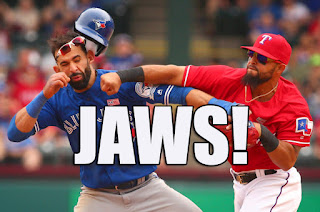