On the way to and from Coffee Outside 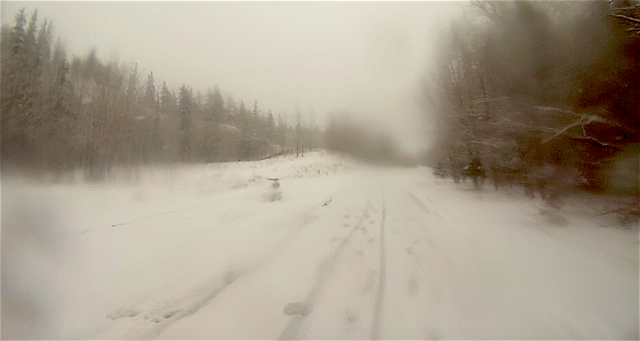 I have wondered about the the flight to artifice when natural beauty is encountered.

Standing in front of a mountain vista, I will routinely offer some version of, wow, it looks like a painting! Or like a postcard. Or that is just out of a movie! This morning as I pedalled in the MacKinnon Ravine the April snow felt etched onto the limbs of the trees. I have often felt dissatisfied with this transposing of the beauty out there into the key of human making.

But, maybe, painting and photography and engraving and the rest of the human arts are as natural to us, as lovely, as nature itself. Or, maybe, so entwined that it is hard to tell nature and art apart.

My bicycle has certainly transported me to feelings of freedom I would not have achieved were it not a piece of technology.

Who are we, really?

At the turn at the bottom of the ravine, a plastic orange fence encircles a soggy sinkhole. A voice inside my head that I cannot silence said: "I sink, therefore, I am." And then: "That's putting your Descartes on the table." In my defence, I have always been like this. My mother tells the story of my reading as a child a DRUGS sign at a Belvedere strip mall as the name of the physician who had a practice there: "Doctor Ugs."


On the river valley trail, I watched two bicycle tracks weave in and out and around each other. At some points, they were too close to each other to have been made by bicycle riders riding together, I thought. I tested this theory by looking at the snow accumulation in the tire marks. Indeed, there was more snow built up in one tread track than the other. Seen in another way, the falling snow had erased more of one track than the other. (Somehow, this detective work reminded me of a Hardy Boys book I read as a boy. The memory is dim. But I recall the case was solved when Joe and Frank figured out the bad guy had tried to conceal his path by retracing his steps in his own footprints! Aha! ) At the crosswalk, one track continued on, and the other, the track with more pavement showing through, went across River Road. I followed it through the trees and up the switchback hill behind the Royal Glenora Club and up to Faraone Park. It stopped behind the tire of the doc's bike at the gazebo where a half dozen of us met for Coffee Outside.  I asked him if he had ridden in solo. He had. Aha!.

Who are we really?
Strange it is to use a machine to feel so not of the machine.

Chris brought butterscotch-and-almond scones, Karen brought muffins. Coffee Outside is not Burning Man, but it was snowing, man. And that made the baked gestures of kindness wonderful. Ellen invited those who might be cold to sit on a heated bench pad she had brought, the weather being what it is.

A path-clearing tractor emerged from the trees and swept into view. It struck me different this time. It seemed to be an animal in its natural winter habitat. Like a tourist, I took a picture of it.


We met and drank coffee, and talked for an hour. And then down we went. The doc cut off the asphalt path and into the trees. Brakes squeezed, I followed. I stood up to better balance myself. The video captured nicely the feeling of being not as much in a snowscape as a liquid seascape:

I got home, wet. The snow today is more slurpee than snow. I carried my bike in and let it drip dry in the spare room downstairs. I peeled off my leg layers and unstrapped my boots and stripped off my wet socks. Two orange socks, two black. I changed into wool leggings and my Uniclo hoodie, put my We The North Tocque on then the hood on over the tocque. And, then, the wool socks we got in a lovely shop in Quebec City on a day the owner just learned her mother had died. Shelagh gave her a hug. I have not yet outgrown the joy of putting on dry clothes and warm wool socks, an cradling a cup of tea, after playing outside in the snow.